Jagayra Gomes is a Senior at Clark who has been playing girls soccer since her Sophomore year. She first started off as midfield but slowly drifted to the backfield as a defender. Last year she stopped countless goals on numerous occasions. She is only 4’10” but that doesn’t stop her from giving her all on the field and keeping the defense united. Her work ethic out on defense doesn’t go unrecognized as this year she is one of the captains for the team. Jay will go the extra mile to make sure that all of her teammates are happy and she is loved by them all.

Jay started playing soccer because as kid she thought it was a really cool sport, so she thought, ” hey, why not try it?”. After getting on the team, Jay says that the thing that keeps her motivated and inspires her to keep playing soccer are her teammates. Jay says that her role as captain is to, “have the team united and set for one goal.” She keeps all of her teammates in check and makes sure that they’re all okay and doing well both in school and on the field.

Her role model on the field is last year’s senior player, Debani Rayo. Debani bettered her as a defender and still cheers for Jay during games from the sideline. To get ready for a game Jay says she, “mentally prepares herself and listens to music.” When she is in the game she always has her game face on. Jay’s job as a defender is to “stop people from scoring and to make sure that everyone is doing what they have to do”. According to Jay, the hardest thing to do on defense is when someone doesn’t know what they’re doing and she has to cover them and yell at them when she’s trying to catch her breath. This gets hard because after having cotton mouth it’s very hard to yell while running.

Jay has high expectations for this year and she hopes to make it far in playoffs. Jay is definitely a Charger to watch this season, so look out for #4 on the defensive end of the field. She will achieve great things this season. 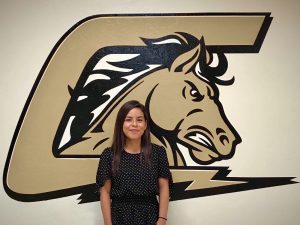