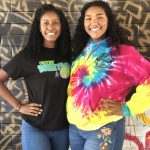 Girl’s Volleyball started off the season with a bang! The girls won their first game of the season against Word of Life. Star player of the game, senior Tsion Gashaw, finished the game with five aces and two kills. Another senior, Coraly Dupree, had a total of six kills and two aces. What a great

Starting Monday, July 16th, practices will be held in the gym every Monday through Thursday from 7:45am-11:45am.  More details to follow after next week.  Please bring your own water and be prepared to put in work!